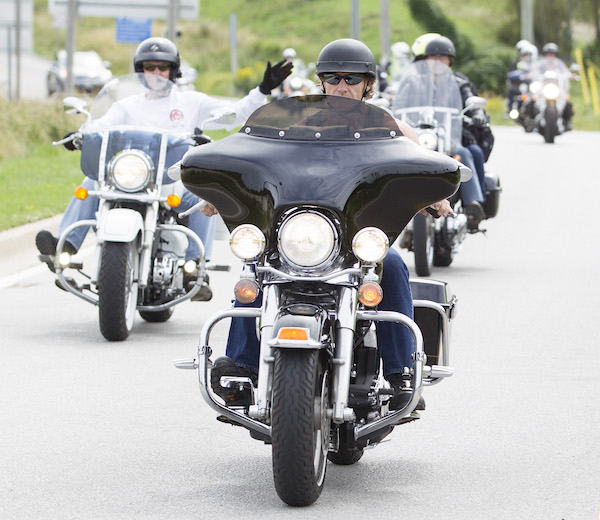 Altogether, The Canada’s 911 Ride Foundation has raised over $200,000 for The Mikey Network, allowing us to place 100 MIKEY defibrillators.

During this amazing event, on-lookers watched and waved as 150 motorcyclists and support staff rode through multiple cities and towns in Southern Ontario. This continuous line of motorcycles, complete with police escort, was something to behold!

The event started in Nottawasaga Inn in Alliston, Ontario on Saturday, then continued with a two hour ride to Meaford where they stopped for a BBQ lunch hosted by the Meaford Fire Department. The Mikey Network and The Canada’s 911 Ride donated two MIKEY defibrillators to them.

From there, we took the scenic route along back roads back to Nottawasaga, enjoying the beautiful scenery the whole way. When we arrived, we took part in a dinner and presentation. The Mikey Network and The Canada’s 911 Ride donated two MIKEY defibrillators units to the Toronto Emergency Task Force, as well as two units to White Knights EMS.

The next morning on Sunday 28th we left Nottawasaga for a tour around Lake Simcoe up to Stouffville ON where we presented a MIKEY to the Teen Challenge Ontario Women’s Center. MIKEY defibrillator recipients now have peace of mind knowing help is close at hand for a second chance at life.

Members of the OPP Golden Helmets Motorcycle Precision Team showed off their amazing riding skill with a Precision Ride performance. The riders take their motorcycles through a series of complex patterns, demonstrating the maneuverability of the motorcycles and the riders’ skills.

Thank you to Canada’s 911 Ride Foundation for choosing The Mikey Network as your charity of choice! With the support of all your generous donations, The Beat Goes On…